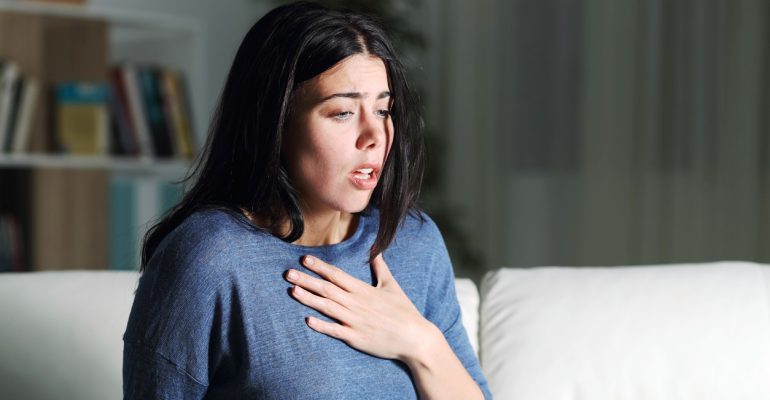 How does one feel during an asthma attack?

To learn what to do during an asthma attack, you first need to understand what one is. An asthma attack is a sudden tightening of muscles around the airways, accompanied by the lining of the airways becoming swollen, and thicker than usual mucus being produced. These combine to cause difficulty breathing, coughing, wheezing and shortness of breath.

For someone who has never experienced an asthma attack before, this can be a frightening experience. If you suspect that you or a friend or loved one is having an asthma attack, the first step is to identify the symptoms. As well as coughing that won’t stop and wheezing when breathing both in and out, typical symptoms include rapid breathing, chest tightness, anxiety or panic and a pale, sweaty face.

If you suspect it’s an asthma attack,  it’s important to act immediately. Most asthma sufferers will carry a portable inhaler with them and this should be sufficient to open up the airways during a mild attack. An inhaler will not be enough to deal with a more severe asthma attack, so a compressor nebulizer can be used, or  you should call an ambulance.

How to help during an episode

If a friend or loved one is undergoing an attack then there is still plenty you can do to help:

It’s important to treat an asthma attack immediately using the medication your doctor has prescribed (typically Albuterol or Terbutaline). Don’t be tempted to wait to see if it goes away by itself, as this can lead to complications later on. It’s also possible for the lungs to tighten so much that the wheezing stops, giving the false impression that things are getting better when in fact they are worse.

If you do successfully treat the attack yourself, you should still contact your doctor to see if your medication needs to be adjusted.

It can also be useful to learn how to spot the early signs of an impending attack. This means you are prepared for it when it comes, and you may even be able to prevent it altogether. Typical early warning signs include:

Avoiding irritants and taking your medication when you spot these signs may help ward off a potential episode.

When to seek help

While most asthma attacks are relatively mild, a severe attack can be life threatening, so you should seek emergency medical treatment if you are in any doubt. If the inhaler doesn’t help or one is unavailable, if lips turn blue or your friend loses consciousness, you should use a nebulizer or call an ambulance immediately.